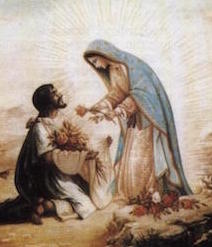 Little is known about the life of Juan Diego, to whom Our Lady of Guadalupe appeared on December 9, 1531. He was given name said to be “Cuauhtlatzin” (meaning “Talking Eagle” in his native language).

He was a member of the Chichimeca people, on of the more culturally advanced groups living in the Valley of Anahuac, as the area that is now Mexico City was once known. He was a leader of his own people and may have been involved in the area’s textile industry.

After the apparition of the blessed Virgin Mary, according to tradition, Juan Diego received the Bishop’s permission to live as a hermit in a small hut near the chapel that was built on Tepeyac. There he cared for the church and the first pilgrims who came to see the miraculous image and pray to the Mother of Jesus. His contemporaries were impressed with his holiness; parents used to bless their children with the wish, “May God make you like Juan Diego.”

PRAYER: Lord God, through St. Juan Diego You made known the love of Our Lady Of Guadalupe toward Your people. By his intercession, grant that we who follow the counsel of Mary, our Mother, may strive continually to do Your will. Amen.
Saint of the Day
St. Agnes, Virgin and Martyr
We Remember
January
Merciful Jesus, grant them eternal rest.
Mass Schedule:
7:30 AMMonday:
7:30 AMTuesday:
7:30 AMWednesday:
7:30 AMThursday:
7:30 AMFriday:
8:00 AMSaturday:
8:00 AMSunday:
8:00 AMHolidays:
Holy Hour - Adoration:
Thursday before First Friday: 7:00 - 8:00 PM