22. Chair of St. Peter the Apostle

Chair of St. Peter the Apostle 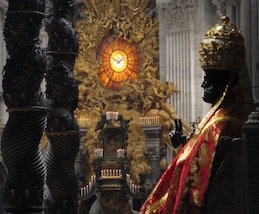 Church historians affirm positively that St. Peter founded the See of Antioch before he went to Rome. Antioch was then the capitol of the East. St. Gregory the Great states that the Prince of the Apostles was Bishop of that city for seven years. It is also a act, based upon the unanimous consent of Christian antiquity, that St. Peter was at Rome and founded the Church there. However, his sojourn in the capital of the Roman Empire was not continuing, as he was often absent when performing his apostolic functions in other countries.

PRAYER: Almighty God, You have built Your Church on the rock of St. Peter’s Confession of Faith. Grant that nothing may divide or weaken our unity in Faith and love. Amen.
Saint of the Day
St. Maximinus of Trier, Bishop
We Remember
May
Merciful Jesus, grant them eternal rest.
Mass Schedule:
7:30 AMMonday:
7:30 AMTuesday:
7:30 AMWednesday:
7:30 AMThursday:
7:30 AMFriday:
8:00 AMSaturday:
8:00 AMSunday:
8:00 AMHolidays:
Holy Hour - Adoration:
Thursday before First Friday: 7:00 - 8:00 PM