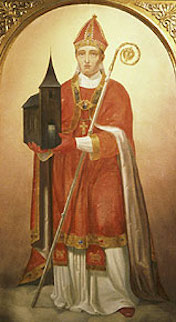 Known as the “Apostle of the North” and specifically of Denmark and Sweden, St. Ansgar was born (801) near Amiens of a noble family. He was educated from childhood at the Benedictine monastery of Old Corbie in Picardy and later became a monk there and Abbot of New Corbie in Westphalia.

On fire with love for God and eager to spread the Faith, the Saint went to Denmark whose king had been newly converted. After establishing a school at Schleswig, he was expelled by the local pagans. Journeying to Sweden, the holy man of God built the first Christian Church there. In 832, he was made Bishop of Hamburg and in 848 Archbishop of Bremen. In 854, he was entrusted with the organization of the hierarchy in the Nordic countries. In 854, he returned to Denmark, converted Erik, King of Jutland, and helped mitigate the horrors of the slave trade. He died in 865.

PRAYER: God, You willed to send St. Ansgar to enlighten many peoples. Through his intercession, grant that we may walk in the light of Your truth. Amen.
Saint of the Day
St. Maximinus of Trier, Bishop
We Remember
May
Merciful Jesus, grant them eternal rest.
Mass Schedule:
7:30 AMMonday:
7:30 AMTuesday:
7:30 AMWednesday:
7:30 AMThursday:
7:30 AMFriday:
8:00 AMSaturday:
8:00 AMSunday:
8:00 AMHolidays:
Holy Hour - Adoration:
Thursday before First Friday: 7:00 - 8:00 PM