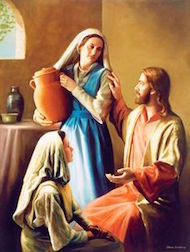 St. Martha was the sister of Mary and Lazarus with whom she lived at Bethany, a village two miles from Jerusalem, a little beyond Mount Olivet, now bearing the name of El’Azaryth of Lazarich. The family, it appears, was of some importance in the country and, as is known from the Gospels, intensely devoted tou out Blessed Lord, Who was frequently their Guest.

Martha is the prototype of the busy housewife because of the incident narrated in the Gospel when she asked Christ to rebuke her sister who was sitting at His feet leaving all the work to her. Instead, she heard the sublime answer that Mary had chosen the best part. Again, it was Martha who at the death of her brother had the faith to declare that God would accomplish anything that Jesus willed, and she heard the words, “I am the Resurrection and the Life,” to which she replied with a magnificent act of faith: “I believe You are the Messiah, the Son of God.” Finally, Martha was serving at table when Mary anointed Christ’s feet with precious nard.

There is an untrustworthy Provencal legend that after our Lord’s Ascension St. Martha traveled to France with her brother and sister, and Lazarus became Bishop of Marseilles. In 1187, her alleged relics were discovered at Tarascon, France, and placed in a magnificent crypt in the collegiate church there.

PRAYER: Almighty, ever-living God, Your Son was a frequent Guest in St. Martha’s home. Through her intercession grant that we may faithfully minister to our brethren and merit to be received in Your heavenly home. Amen.
Saint of the Day
The Conversion of St. Paul, Apostle
We Remember
January
Merciful Jesus, grant them eternal rest.
Mass Schedule:
7:30 AMMonday:
7:30 AMTuesday:
7:30 AMWednesday:
7:30 AMThursday:
7:30 AMFriday:
8:00 AMSaturday:
8:00 AMSunday:
8:00 AMHolidays:
Holy Hour - Adoration:
Thursday before First Friday: 7:00 - 8:00 PM