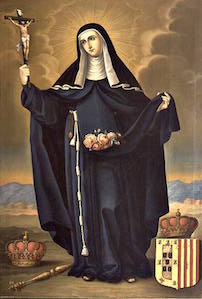 The father of St. Elizabeth was Peter III, King of Aragon. She came into the world at the royal palace in Saragossa in 1271, and received the name of Elizabeth after her aunt, St. Elizabeth of Hungary, who several years before had been canonized by Pope Gregory IX.

Elizabeth’s grandfather, James I, who then occupied the throne of Aragon, took charge of her education, but he died before she was six years of age. Her early years were spent in the most extraordinary pieta and at the age of twelve she was given in marriage to Dionysius, King of Portugal. However, her husband left her free to practice her devotions, and she lived on the throne with the virtue and regularity of a Religious. Eventually, her patience and gentleness succeeded in converting the King, who had been leading a licentious life. Charity to the poor was one of her characteristic virtues, and her works for the good of her fellowmen knew no bounds.

The Saint’s virtue also had to pass through the crucible of suffering. One of the keenest pangs she endured came from the revolt of her son, and the unjust treatment of the latter, who suspected her of favoring his son. The King, however, soon acknowledged his error and made amends, and the saintly woman succeeded in effecting a reconciliation between father and son.

After the death of her husband Elizabeth took the habit of the Third Order of Dt. Francis and retired to a convent of Poor Clares, near which she dwelt in a house had erected. Hearing that her son, Alphonsus IV, King of Portugal, had gone to war with her grandson, Alfonso XI, King of Casile, she set out on a journey to reconcile them and succeeded.

This was the Saint’s last act of mercy, for having arrived at Estremoz, on the frontiers of Castile where her son was, she fell ill. After receiving the Last Sacraments, she died on July 4, 1336, and was canonized in 1625 by Pope Urban VIII.

PRAYER: God, Author of peace and Lover of charity, You endowed St. Elizabeth with the wondrous grace of bringing dissidents together. Through her intercession enable us to practice works of peace so that we may be called children of God. Amen.