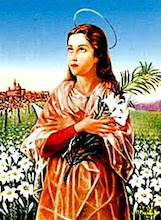 St. Maria Goretti was born on a small farm near Ancona, Italy, in 1890. The third of seven children, she was in the words of her mother, “happy, good, open hearted, without whim, but with a sense and seriousness beyond her years, and never disobedient”. Her father died when she was nine, and Maria helped out with younger children and the housework while her mother ran the farm. She received First Communion at eleven and strove to do better each day.

Six months later, this heroic maiden was severely tried for faith. The Goretti family shared a home with the partner of their father and his son, Alexander, a wicked-minded youth who began making sinful advances toward Maria. She repelled them immediately but said nothing about them for he threatened to kill her and her mother if she did. Finally, lust drove the tragic Alexander to attack outright, but again the Saint resisted him with all her strength, crying out repeatedly: “No, it’s a sin! God does not want it!” Thereupon, the attacker, overwhelmed by fear and anger, began to strike at her blindly with a long dagger, and several blows passed clear through her body.

St. Maria was rushed to the hospital at Nettuno and surgeons worked feverishly to save her life, but it soon became evident that nothing could be done. The next morning she was given Communion but first queried about her attitude toward Alexander. She replied clearly that she forgave him, that she would pray for his repentance, and that she wished to see him in heaven. On July 6, 1902, this saintly maiden died and went to meet her heavenly Spouse for Whose love she had been willing to give her life.

On July 25, 1950, Maria was raised to sainthood by Pope Pius XII, with her mothers, brothers and sisters present, a unique event in the history of the Church. By that time her prayers for her murderer had long since been heard and answered. After eight years of unrepentant imprisonment, Alexander had a complete change of heart. Released for good behavior after twenty-seven years, he hastened to beg forgiveness of the Saint’s mother and then became a Capuchin laybrother, who gave evidence at the canonical inquiry about Blessed Maria and lived to see her canonized.

PRAYER: God, Author of innocence and Lover of chastity, You conferred on St. Maria Your handmaid the grace of martyrdom at a youthful age. Through her intercession grant us constancy in Your commandments, You Who gave the crown to a virgin who fought for You. Amen.
Saint of the Day
3. St. Thomas, Apostle
We Remember
July
Merciful Jesus, grant them eternal rest.