30. The First Holy Martyrs of the Holy Roman Church

The First Holy Martyrs of the Holy Roman Church 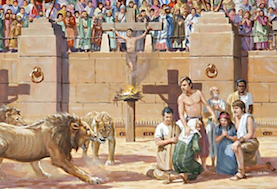 For varying and valid reasons, the new reformed liturgical Calendar of the Church has suppressed many names of ancient Martyrs. In exchange this feast has been inserted into the Calendar on the day following that of Sts. Peter and Paul in honor of the first Martyrs of the Church of Rome who were put to death at the Vatican Circus at the time of the persecution under Nero (in the year 64).

Whatever was the real cause of the conflagration that erupted within the confines of the Palatine and the Celius and ravaged the city for six days and seven nights, the wicked Emperor elected to hold Christians responsible for it—most of them slaves, enfranchised, and foreign. The cruelty and injustice of the ensuing repression, which had the victims torn to pieces by wild beasts or burned like living torches, eventually evoked the indignation of pagans such as Tacitus. The feast of these Christian Martyrs had been celebrated on June 27 in Rome from 1923 on.

PRAYER: God, You consecrated the copious firstfruits of the Roman Church with the blood of Martyrs. Grant that we may be strengthened in virtue by the agony of such a struggle and always rejoice in their victory. Amen.
Saint of the Day
Assumption of the Blessed Virgin
We Remember
August
Merciful Jesus, grant them eternal rest.
Mass Schedule:
7:30 AMMonday:
7:30 AMTuesday:
7:30 AMWednesday:
7:30 AMThursday:
7:30 AMFriday:
8:00 AMSaturday:
8:00 AMSunday:
8:00 AMHolidays:
Holy Hour - Adoration:
Thursday before First Friday: 7:00 - 8:00 PM