25. The Annunciation of the Lord

The Annunciation of the Lord 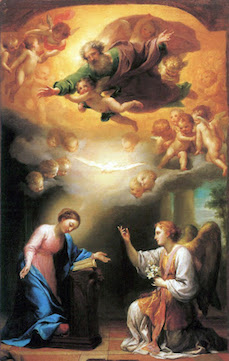 The feast of the Annunciation falls on March 25. On this day the Church commemorates the coming of the Archangel Gabriel to announce to the Blessed Virgin that she was to be the Mother of the promised Redeemer. On this same day, God the Son, the Second Person of the Blessed Trinity, by the power of the Holy Spirit, assumed a human body and a human soul and became the Son of Mary.

This date is, therefore, a double feast, the Annunciation of the Maternity of the Blessed Virgin, and the Incarnation of the Son of God. The Angel of the Incarnation was sent to that maiden of Nazareth who, deeming herself least worthy among the daughters of Zion, had been chosen by her Creator to be the most blessed among women.

“The Angel Gabriel was sent from God to a town of Galilee named Nazareth, to a virgin betrothed to a man named Joseph, of the house of David. The virgin’s name was Mary. Upon arriving, the Angel said to her: ‘Hail, full of grace. The Lord is with you.’ She was deeply troubled by his words, and wondered what his greeting meant.

The Angel went on to say to her: ‘Do not fear, Mary. You have found favor with God. You shall conceive and bear a Son and give Him the name Jesus. . . . The Holy Spirit will come upon you and the power of the Most High will overshadow you; hence, the holy offspring to be born will be called the Son of God. . . .’

Mary bowed her head and will to the Divine decree, and at that instant the great fact of the Incarnation was accomplished. A Virgin of the House of David had become the Mother of God. The Second Person of the Blessed Trinity had become Man, like unto us in all things save sin.

Next after His Heavenly Father and the Holy Spirit, there was no one whom Jesus venerated and loved as He venerated and loved His Blessed Mother. He who has not love and veneration for the Mother of Jesus is unlike our Divine Savior in that particular perfection of His character which comes next after His piety toward the Eternal Father and the Holy Spirit.

“As soon as man receives into his heart the full meaning of the Annunciation and the full light of the Incarnation, two self-evident truths arise upon his reason: the one, the presence of Jesus in the Blessed Sacrament; the other, the love and veneration of His Blessed Mother” (Cardinal Manning).

PRAYER: God, You willed that Your Word should truly become Man in the womb of the Virgin Mary. We confess that our Redeemer is both God and Man. Grant that we may deserve to be made like Him in His Divine Nature. Amen.
Saint of the Day
St. Thomas Aquinas, Priest and Doctor of the Church
We Remember
January
Merciful Jesus, grant them eternal rest.
Mass Schedule:
7:30 AMMonday:
7:30 AMTuesday:
7:30 AMWednesday:
7:30 AMThursday:
7:30 AMFriday:
8:00 AMSaturday:
8:00 AMSunday:
8:00 AMHolidays:
Holy Hour - Adoration:
Thursday before First Friday: 7:00 - 8:00 PM