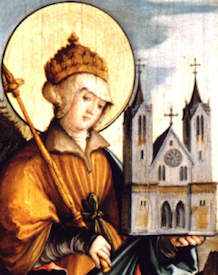 The Father of St. Cunegundes was Sigfrid, first Count of Luxemburg. After a pious education, she was married to St. Henry, Duke of Bavaria, who, upon the death of Emperor Otho III, was chosen King of the Romans. St. Cunegundes was cowned at Paderborn in 1002.

In 1014, the Saint went with her husband to Rome and became Empress, receiving together with him the imperial crown from the hands of Pope Benedict VIII. Though married, she lived in continence, for, with her husband’s consent, she had made a vow of virginity before her marriage.

Henry II died in 1024, leaving his widow comparatively poor, for she had given away nearly all her wealth in charitable works.

In 1025, on the anniversary of his death, and on the occasion of the dedication of a monastery that she had built for Benedictine nuns at Kaffungen, Cunegundes clothed herself with a poor habit, adopted the veil, which she received from the hands of the Bishop, and entered that same monastery. She spent the last fifteen years of her life in prayer, reading, and manual labor. She died about 1040.

PRAYER: God, You inspired St. Cunegundes to strive for perfect charity and so attain Your Kingdom at the end of her pilgrimage on earth. Strengthen us through her intercession that we may advance rejoicing in the way of love. Amen.
Saint of the Day
3. St. Thomas, Apostle
We Remember
July
Merciful Jesus, grant them eternal rest.