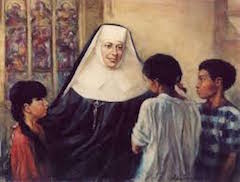 Born in 1858, into a prominent Philadelphia family, Katharine became imbued with love for God and neighbor. She took and avid interest in the material and spiritual well-being of African Americans and Native Americans. She began by donating money but soon concluded that more was needed—the lacking ingredient was people.

Katharine founded the Sisters of the Blessed Sacrament for Native Americans and African Americans, whose members would work for the betterment of those they were called to serve. From the age of 33 until her death in 1955, she dedicated her life and a fortune of 20 million dollars to this work.

In 1894, Mother Drexel took part in opening the first mission school for Native Americans, in Santa Fe, New Mexico. Other schools quickly followed—for Native Americans west of the Mississippi River and for African Americans in the southern part of the United States. In 1915 she also founded Xavier University in New Orleans. At her death there were more than 500 Sisters teaching in 63 schools throughout the country. Katherine was beatified by Pope John Paul II on November 20, 1988, and canonized on October 1, 2000 by the same Pontiff.

PRAYER: God, You called St. Katharine Drexel to teach the message of the Gospel and to bring the life of the Eucharist to the African American and Native American peoples. By her prayers and example, help us to work for justice among the poor and the oppressed, and keep us undivided in love in the Eucharistic community of Your Church. Amen.
Saint of the Day
3. St. Thomas, Apostle
We Remember
July
Merciful Jesus, grant them eternal rest.