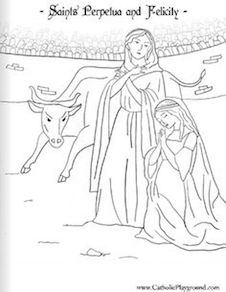 Sts. Perpetua and Felicity and the friends who died with them at Carthage are in a special class among the primitive Martyrs since we possess authentic detailed records that give us a vivid picture of their experiences and personalities. There is a diary of St. Perpetua herself, a page by another martyr, and a concluding account by a first-hand witness who is through to have been Tertullian.

St. Perpetua was a twenty-two-years-old noble lady of Carthage with a baby son and St. Felicity was a married slave who was pregnant. They were arrested under the anti-Christian edict of 202 along with three fellow Christians, Saturninus, Secundulus, and Revocatus. All had been converted by a layman, Saturus, who joined them voluntary in the dungeon in which they were imprisoned for refusing to sacrifice to the gods.

St. Perpetua yielded her nursing child to her pagan father but remained firm in her Faith in spite of his pleas. St. Felicity gave birth to a child in prison and also remained steadfast in the Faith when the child was taken from her.

The Martyrs were condemned to death and mauled by beasts in the amphitheater before finally being beheaded in the year 203. So shaken was the executioner by St. Perpetua’s commanding aristocratic appearance that she herself had to guide his blade to her neck.

Their martyrdom became known throughout the Church—St. Augustine preached in their honor at least three times. Sts. Perpetua and Felicity are mentioned in the Roman Canon.

PRAYER: God, inspired by Your love, Sts. Perpetua and Felicity were able to disregard persecution and overcome the torment of death. Aided by their prayers, may we make constant progress in our love for You. Amen.
Saint of the Day
3. St. Thomas, Apostle
We Remember
July
Merciful Jesus, grant them eternal rest.