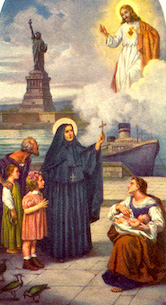 Frances Xavier Cabrini was born in Lombardy, Italy, in 1850, one of the thirteen children. At eighteen, she desired to become a Sister but poor health stood in her way. She helped her parents until their death, and then worked on a farm with her brothers and sisters.

One day a priest asked Frances to teach in a girls’ school, and she stayed for six years. At the request of her Bishop, she founded the Missionary Sisters of the Sacred Heart to care for poor children in schools and hospitals. Then at the urging of Pope Leo XIII she came to the United States with six Sisters in 1889 to work among the Italian immigrants.

Filled with a deep trust in God and endowed with a wonderful administrative ability, this remarkable woman soon founded schools, hospitals, and orphanages in a strange land and saw them flourish in the aid of Italian immigrants and children. At the time of her death, in Chicago on December 22, 1917, her institute numbered houses in England, France, Spain, the United States, and South America. In 1946, she became the first American citizen to be canonized, when she was elevated to sainthood by Pope Pius XII.

PRAYER: God, You called St. Francis Cabrini from Italy to serve the immigrants of America. By her example teach us concern for the stranger, the sick, and frustrated. By her prayers help us to see Christ in all the men and women we encounter. Amen.
Saint of the Day
4. St. John Vianney
We Remember
August
Merciful Jesus, grant them eternal rest.
Mass Schedule:
7:30 AMMonday:
7:30 AMTuesday:
7:30 AMWednesday:
7:30 AMThursday:
7:30 AMFriday:
8:00 AMSaturday:
8:00 AMSunday:
8:00 AMHolidays:
Holy Hour - Adoration:
Thursday before First Friday: 7:00 - 8:00 PM