170th Anniversary of the Conregation 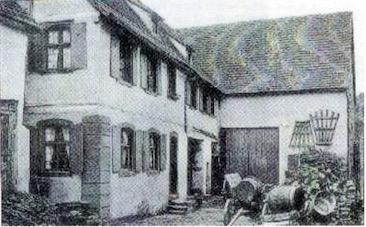 The history of our Congregation is closely linked to our Foundress' native house.
The house was built in 1807. Even after so many years, it remains in good condition. The grandparents and siblings of Elizabeth Eppinger, Blessed Alphonse Marie lived on the ground floor. In 1976, the Sisters of the Congregation of the Divine Savior bought this house and a community of 3-4 Sisters was established. Relatives of Blessed Alphonse Marie still live in two of the neighbors’ homes. 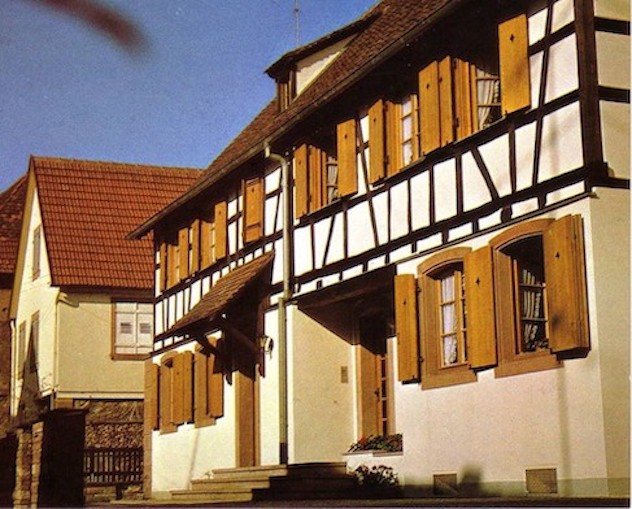 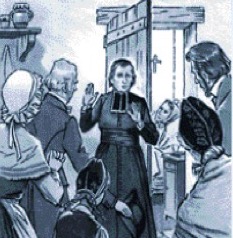 Above the barn of the parenteral house, two rooms were erected and furnished for Elizabeth’s use. There was a very small waiting room for the visitors, furnished with a stove, a small table, several chairs and a few devotional pictures. A glass door led into the patient’s cell, and through this, visitors could see Elizabeth.
The number of visitors was high and continued to increase; often as many as eighty to ninety people visited in a single day. The many visitors brought disturbance, interior and exterior suffering. Father Richard was advised to forbid visitors for the time being. But, was it at all possible to turn the people away, people who had come from central France, from Germany, from Switzerland? That could not be done, but somehow the great stream of visitors had to be checked in some way. Only those who had permission from Father Richard could visit; and after 9 in the evening, all visits were forbidden.
Today, in this room are various items, reminding us of Blessed Alphonse Marie and the history of the Congregation.

The Room of Elizabeth
In this room, bed-ridden Elizabeth lived right before the founding of the Congregation, carrying out her apostolate – spiritual accompaniment of others.
There was a statue of the Virgin Mary placed on a small altar, and several devotional pictures hung on the wall. For the guests, there was an armchair and a few other chairs. This simple cell was in conformity with the serious occupant. Before Elizabeth, stood the Cross and the Madonna. Here she welcomed her visitors and received many letters. Father Richard helped Elizabeth answer them. He was also the interpreter for many of the visitors. He heard the confession of numerous people who came from Elizabeth’s room. Father Richard wrote to Bishop Räss, “The good God shows his great mercy to all persons who ask “our Saint” for advice. Oh, your Grace! How very good God is to us, how many graces He pours out upon your Diocese! If your Excellency could see and hear what takes place at the bed of this sick-bed! ...” 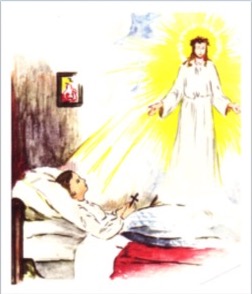 In this room, Elizabeth experienced her ecstasies. During her ecstasies, the Lord gave many special revelations for the people for whom she was praying. These were admonitions or advice for striving for greater perfection. Numerous people, especially priests, received valuable guidelines from her. Father Richard listened to her revelations each day and recorded them conscientiously, as she dictated them. “I have tried, as much as possible to use the same expressions she used, and therefore to preserve the originality of her ideas”, he wrote to Bishop Räss. “I do not know the meaning of all that she tells me, but since she must tell everything to her confessor, I believe it is also my duty to report everything to your Excellency.”
It was in this room that she received the thought to found a new congregation. On September 4th, she heard Jesus’ voice, “During the holy Sacrifice of the Mass I will enlighten your confessor regarding the new Order and its founding. Soon I will let you know, 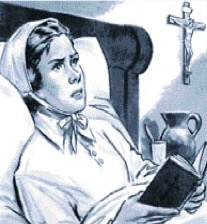 my daughter the form and the manner in which it is to be established.” On September 15th, like a nightmare, interior suffering descended on Elizabeth’s soul. But the Lord reassured her, “See, my daughter, these sufferings that I am sending you have great value. You will soon understand that it is along this way that you are to walk. In the new Order that you will establish, you will have to teach the others how they are to conduct themselves in such trials.” The Lord allowed her to see in a vision how her Congregation would spread through the provinces of France and over other countries. “Behold, from your childhood on, I have designated you to tell the learned ones of this world – who depend only on worldly wisdom and science – that they have departed from my ways, and to instruct them about this simple way of my teachings and my sufferings.” “O Jesus”, she responded, “how can you use me for something like that?” But the Savior encouraged her, “Do not worry about that. It is my work, and especially because you are unlearned, I want to make my mercy known through you.” 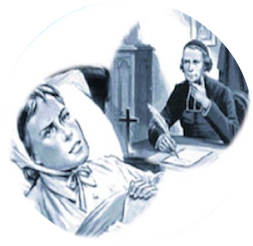 In this room, Elizabeth and Father Richard formed the new work. As soon as Elizabeth recognized the goal and the manner of this new work, she began it in God’s name, without hesitation. She told Father Richard of the plan, which appeared so clean and compelling before her mind’s eye. How earnestly she must have prayed before each of these decisive conversations! Father Richard hesitated. Elizabeth continued to encourage him and kept on asking. Then, during the night of May 21, 1849, the Savior appeared to her and spoke, “Tell your confessor, that he must soon begin this work of mine. I will give much help and many graces to my servant.” Now Father Richard no longer hesitated. He trusted in the Lord’s goodness. In Elizabeth’s room, the two worked intensively on the Constitutions of the Order.
Today, this room is a Chapel, where the center place takes the Tabernacle in the form of the Cross.

The Tabernacle in the form of the Cross 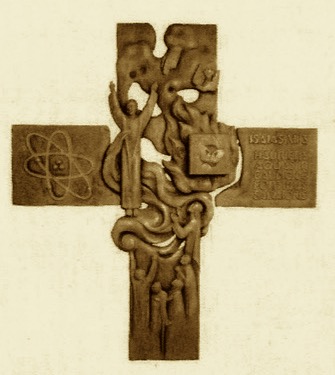 • Cross is a symbol of redemption. Elizabeth contemplated it often from her childhood.
• Christ is the Center of all. He is the Redeemer.
• Water flowing from Christ’s side is a source of life and salvation. “With joy you will draw water from the wells of salvation.” (Is 12:3)
• World – humanity longs for the source of salvation to quench their thirst.
• Fire is the symbol of love which appeared in Christ as God’s mercy. “The Sacred Heart of Jesus is to be the model according to which the Sisters are to form their hearts” (cf. Original Rule).
• Eucharist is a gift of Christ, his sacrifice on the cross, our strength, a place of meeting with Christ and with others...
• Blessed Virgin Mary is the Mother of Redeemer, Mother of Church, and our Mother. She is a pilgrim of faith.
Who we are
SDR ConregationMother Alphonse MarieSDR HistoryAmerican RegionSDR PatronessDivine RedeemerBeatification of MAM
Saint of the Day
St. Maximinus of Trier, Bishop
We Remember
May
Merciful Jesus, grant them eternal rest.
Mass Schedule:
7:30 AMMonday:
7:30 AMTuesday:
7:30 AMWednesday:
7:30 AMThursday:
7:30 AMFriday:
8:00 AMSaturday:
8:00 AMSunday:
8:00 AMHolidays:
Holy Hour - Adoration:
Thursday before First Friday: 7:00 - 8:00 PM