170th Anniversary of the Conregation

170 Years of the Sisters of the Divine Redeemer

Blessed Alphonse Marie, Elizabeth Eppinger, a Foundress of the Sisters of the Divine Redeemer, from her a very young age was eager to devote herself to God. At the invitation of the local priest, Elizabeth and her early companions visited the marginalized, the sick, people who lived alone, and families experiencing difficulty.

Sisters of the American Region Celebrated 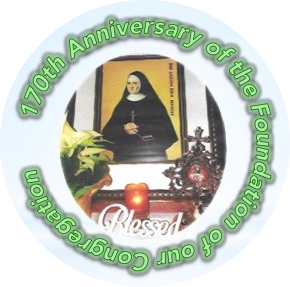 Elizabeth’s desire to enter an Order was great. Her confessor even suggested her to enter the Congregation of the Sisters of the Ribeauvillé, take their habit and name of Sister Alphonse Marie Liguori (a Neapolitan priest, Founder of the Redemptorists, who worked with the poor in the countryside during the 18th century). But Msgr. Raess, from whom the Priest sought advice, accurately wrote: “Prudence demands that in this case we should not be too hasty.”

Bishop Räss knew of the wholesome and beneficial influence Elizabeth exercised over a large section of the population, and he wanted to insure the continuance of this influence for the general public. He was already entertaining thoughts of founding a congregation that would respond to the needs of the times and have as its main objectives the care of the sick, of the elderly, and of children. Certainly, it was an inspiration from God that was given to him that Elizabeth Eppinger might be placed as superior of the young community, especially, since for years now, a number of like-minded girls had gathered around Elizabeth, allowing themselves to be guided and directed by her instructions.

Yet, Elizabeth herself never had the slightest thought about founding a new religious community. It was only following interior enlightenment that she recognized the will of God in the wishes of the Bishop, and came to a decision. Jesus was about to let his little bride know that she was being called to found a new Order.

Elizabeth was called to something else, to a greater good for the diocese. Jesus was about to let his little bride know that she was being called for found a new Order: “I am destining you for this Order. I am preparing the necessary graces for you and I will teach you what you are to say. I want to show you the inner ways by which you must teach each person … abandon yourself to me and worry about nothing when you do my will.”

On August 28, 1849, the people of Niederbronn took part in the installation of the eldest of the Eppinger children, Elizabeth, in a little house in the village where four young Alsatian girls were waiting for her. In the same week they were joined by five others. They formed with Elizabeth a community of ten members.

Soon the house was designated as the “little convent”. Thus, in great simplicity, the Order of the Daughters of the Divine Redeemer was founded. The little convent was just a house alongside the others of the village. A little chapel had been furnished in a basic way on the ground floor.

A small community, which was born, received the Original Rule which can be summarized as follows:
1. Contemplating in the Gospel the merciful heart of Jesus
2. Contemplating His attitude towards all those who suffer in body or in mind, as well as sinners. 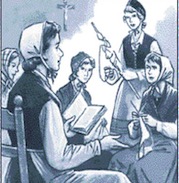 This involved shaping one’s heart on the Heart of Jesus to be a Good Samaritan like Him and to act as disciples to whom Jesus said: “Go and do likewise” (Lk 10:37), learning how to love and to become close to all people.

On September 10, 1849, Elizabeth Eppinger received the habit in the little chapel that had just been fitted out in the summer and she officially took the name of Sister Alphonse Marie. She was appointed Superior General of the new Congregation by the bishop. Then on December 27, 1849 it was the novices’ turn to take the habit as they promised obedience to Sr. Alphonse Marie. They formed the first novitiate.
Who we are
SDR ConregationMother Alphonse MarieSDR HistoryAmerican RegionSDR PatronessDivine RedeemerBeatification of MAM
Saint of the Day
St. Thomas Aquinas, Priest and Doctor of the Church
We Remember
January
Merciful Jesus, grant them eternal rest.
Mass Schedule:
7:30 AMMonday:
7:30 AMTuesday:
7:30 AMWednesday:
7:30 AMThursday:
7:30 AMFriday:
8:00 AMSaturday:
8:00 AMSunday:
8:00 AMHolidays:
Holy Hour - Adoration:
Thursday before First Friday: 7:00 - 8:00 PM