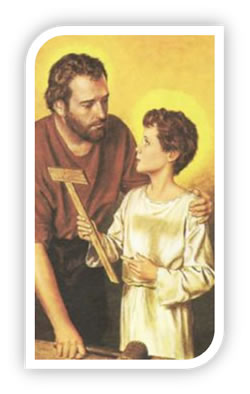 St. Joseph was called by God to serve the person and mission of Jesus directly through the exercise of his fatherhood. He cooperated in the fullness of time in the great mystery of salvation and is truly a “minister of salvation”.

He became the Patron of the SDR Congregation from the beginning of it existence. When the first “Little Cloister” was too small for them Mother Alphonse Marie felt urged to entrust all her cares to St. Joseph and consecrated the Congregation to him, he was to be their protector and provider; he would build the new house for them; they would have to begin building now.

“We are confident, that God in His mercy will grant His blessing to us in this building, which He is beginning. It is the House of the Lord. He Himself has placed it under patronage and protection of St. Joseph.” 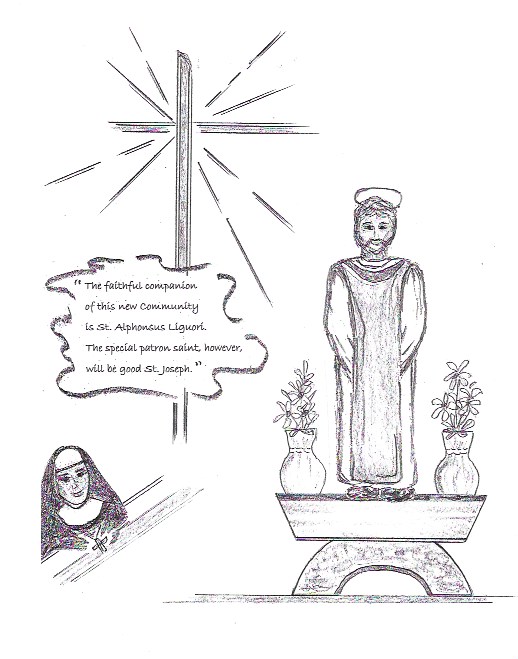 But St. Joseph was protector not only to build the houses but also he was a builder of community. Mother Alphonse Marie said about it: “This morning during Holy Mass, just as I was praying to St. Alphonsus as protector of our order, I heard a voice from the St. Joseph altar, which distinctly said to me: ‘It is not St. Alphonsus but St. Joseph who is the protector of this house. He will preserve the good spirit of the house and no one will be able to harm it. In order to guide and direct this Congregation, you will receive the same graces as St. Teresa’. And she at the same time saw St. Joseph as he built the new Convent.”

Later the Divine Redeemer added: “Behold, my daughter, my Father, St. Joseph, will be the special protector and patron of this house. This Order will receive many graces through his intercession, yes, very special graces. (Then she was instructed about the simplicity of this saint.) Behold the simplicity of St. Joseph, my father. I take great pleasure in this. That is why I give him to this house as Protector.
That same day, Vicar Pastor Lienhart received the following letter from a stranger: “I have been hearing an inner voice since early Wednesday and so I must tell you that St. Joseph is urging me against my will to give the Mother Alphonse Marie and the Reverend Father a sum of 8,000 Francs, in order to help you with the building of the new wing.” It seems that the Lord is in a hurry with help for this work. How could it be otherwise, with St. Joseph as the Protector and Builder!

One day a gentleman of average height and gray hair came into the parlor and gave the portress a little bag of money for the Superior. The Sister asked him to wait; she wanted to call the Reverend Mother. When the two came back, they found the little bag, but no trace of the mysterious person.

A short time later, Mother Alphonse Marie was going through the house with cousin to check workers. The portress came to call her to the parlor, to thank a man who had brought a heavy bag full of money. Reverend Mother had just finished telling her cousin that she did not have even a cent with which to pay workers at the end of the week.

These and similar occurrences were attributed to the intercession of St. Joseph.

St. Joseph, pray for us and grant for us a true spirit of community and the grace of a happy death.

Prayer: Grant, we pray, almighty God, that by Saint Joseph's intercession your Church may constantly watch over the unfolding of the mysteries of human salvation, whose beginnings you entrusted to his faithful care. Through our Lord Jesus Christ, your Son, who lives and reigns with you in the unity of the Holy Spirit, one God, forever and ever. Amen
Who we are
SDR ConregationMother Alphonse MarieSDR HistoryAmerican RegionSDR PatronessDivine RedeemerBeatification of MAM
Saint of the Day
8. Immaculate Conception of the Blessed Virgin Mary
We Remember
December
Merciful Jesus, grant them eternal rest.
Mass Schedule:
7:30 AMMonday:
7:30 AMTuesday:
7:30 AMWednesday:
7:30 AMThursday:
7:30 AMFriday:
8:00 AMSaturday:
8:00 AMSunday:
8:00 AMHolidays:
Holy Hour - Adoration:
Thursday before First Friday: 7:00 - 8:00 PM